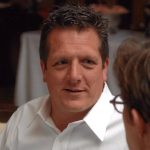 Recently, researchers in the program have discovered a synthetically accessible class of molecules that appear to increase the effects of novel anticancer drugs by several orders of magnitude.  The overarching goal is to reduce the working concentrations of ALL anti-cancer drugs in order to mitigate serious side effects.  Here, we propose to develop and screen our new molecules with both novel and existing chemotherapeutics against a variety of cancer cell lines in order to define the optimum combination treatment.  Also we are working on tumor formation.  The life and death of cells must be balanced if tissue homeostasis is to be maintained-there should neither be too much growth nor too little death.  Normal cells accommodate this balance by invoking intrinsic programmed cell death, referred to as apoptosis.  Apoptosis is triggered via three signaling pathways.  If apoptosis does not occur correctly and cells do not die, then malignant tumors form.  It is no surprise therefore that countless cancer therapeutics are being developed to control apoptosis.  It is known that all three apoptosis signaling pathways route through a protein known as caspase-3.  If caspase-3 fails to function, then cell death does not happen correctly and cancer occurs.  It is known that a calcium-binding protein known as calbindin-D28K binds to caspase-3 and stops it functioning.  If we can stop calbindin-D28K from interfering with caspase-3, apoptosis would occur normally and the risk of cancer developing would be significantly reduced.  Consequently calbindin-D28K is a particularly powerful target for anticancer drug development. 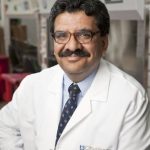 Funded by the Dick Vitale Gala in Memory of Caleb Gacobbe 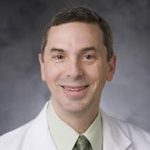 Long Interspersed Element-1 (L1) retrotransposon is the driving force of all transposon-induced mutagenesis in the human genome. L1-induced mutagenesis has taken a center stage after new L1 insertions have been identified in cancer-promoting genes, suggesting that L1 mutations may be driving human cancers. This study is focused on lung cancer because many lung malignancies are deficient in a cellular pathway shown to suppress L1-induced damage in cultured cells. This funding allowed us to develop a reliable pipeline for Next Generation Sequencing analysis of L1 expression. The funding also provided the opportunity to further our understanding of the impact of L1-induced damage in lung cancer in vivo.

The attacks on the World Trade Center (WTC) on Sept 11, 2001 created an environmental exposure to WTC aerosolized dust and gases that contained known and suspected carcinogens. We continue to prospectively follow the entire FDNY cohort of firefighters and emergency medical service (EMS) workers that were exposed to these carcinogens for cancer incidence and have proposed to conduct studies to estimate the prevalence of blood cancers (myeloma and myelodysplastic syndromes) and pre-cancerous conditions in a subset of this cohort. Studies being conducted at Dr Landgren’s lab at Sloan Kettering are analyzing the proteins in the blood samples for detection of myeloma and pre-myeloma disorders. Studies at Dr Verma’s lab are using genome sequencing technologies to detect for the presence of cancer associated mutations in these samples. Dr Prezant’s group at FDNY has built infrastructure for the collection of the samples and has led to successful banking of over 3000 samples from firefighters exposed to the WTC disaster. Data generated from these studies will uncover the effects of WTC exposure on the development of blood disorders and also demonstrate the role of environmental exposures on cancer in general.