Cary, N.C. [May 6, 2022] – The V Foundation for Cancer Research, a top-rated cancer charity, and ESPN Hall of Fame Sportscaster Dick Vitale are pleased to announce the 17th Annual Dick Vitale Gala has raised $11.1 million for pediatric cancer research. Held on May 6 at the Ritz-Carlton, Sarasota, the Gala hosted supporters and celebrities to further groundbreaking advancements in childhood cancer research. To date, the gala has helped raise nearly $55 million for the Dick Vitale Fund for Pediatric Cancer at the V Foundation. This year, Vitale’s message took on special meaning as he shared stories of inspiration drawn from his own recent cancer journey. Dick announced his remission in April. 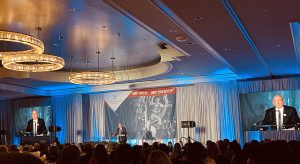 “The true stars at the Gala were the Dickie V All-Courageous Team, which features young cancer survivors,” Vitale said. “We surpassed our fundraising goal and are proud to announce that tonight’s event raised over $11 million for pediatric cancer research. Thank you to all the generous donors who have contributed this cause.”

“Dick Vitale has managed to astound us again,” said Shane Jacobson, CEO of the V Foundation. “Immediately after finishing his own cancer journey, he hosts another incredible Gala and raises a record-breaking amount to fund pediatric cancer research through the V Foundation. His efforts are unmatched and our gratitude is overflowing. He is changing the lives of young cancer patients through his efforts.”

At the Gala, Jacobson announced a $1 million donation made by Jeff and Penny Vinik to the Dick Vitale Fund for Pediatric Cancer and issued a challenge to match that $1 million donation to further pediatric cancer research. Jeff and Penny have personally donated nearly $3 million to the V Foundation through the Vinik Family Foundation, and the Lightning Foundation has provided $537,000 in sponsorships for the Dick Vitale Gala.

“Penny and I could not be more proud to support the work of the V Foundation, and there’s no better time to give than at Dickie V’s Gala,” said Jeff, owner of the back-to-back Stanley Cup winning Tampa Bay Lightning. “With so many cancer treatment breakthroughs on the horizon, we feel incredibly hopeful about the future.” 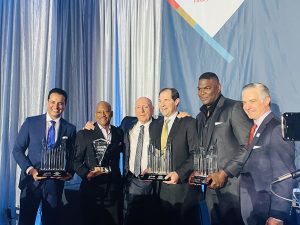 Currently, only 4% of federal cancer funding is focused on pediatrics. Yet, pediatric cancers are the leading cause of death of American children over the age of one, with more than 15,000 children and adolescents diagnosed each year in the U.S. Private funding has become a critical component of advancing pediatric cancer research.

At the 2022 gala, it was announced that Dick Vitale would receive the Jimmy V Perseverance Award at the 2022 ESPYS. In honor of Dick’s award, Mark and Cindy Pentecost, founders of It Works!, announced they will match all of your donations, up to $1 million, to the Dick Vitale Fund for Pediatric Cancer. Learn more about the match here.

The 18th annual Dick Vitale Gala, benefiting the V Foundation, will be held May 5, 2023, at the Ritz-Carlton in Sarasota, Florida.

The honorees will be:

The V Foundation holds 11 consecutive 4-star (highest) ratings from Charity Navigator, America’s largest evaluator of charities, making the Foundation among the top 2% of all charities evaluated. The V Foundation is also a GuideStar Platinum-rated charity. To learn more about the V Foundation, please visit v.org.

About the V Foundation for Cancer Research