Many childhood cancers are now very treatable thanks to new approaches to therapy. However, progress has been slower for rhabdomyosarcoma, the most common soft tissue sarcoma affecting children. Unfortunately, children with this cancer have few options, so they usually receive very aggressive treatments that don’t always work. Even when therapies do work, they tend to come with serious, long-term health problems. 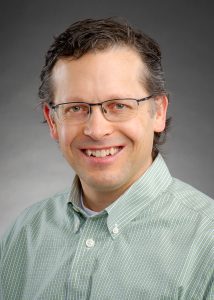 With V Foundation support, Mark Hatley, M.D., Ph.D., at St. Jude Children’s Research Hospital is trying to figure out what drives rhabdomyosarcoma in hopes of finding new ways to help children with this cancer.

“Researchers have been working on developing treatments for rhabdomyosarcoma for decades, but this work hasn’t moved the needle that much,” said Hatley. “Instead of trying to find the next new drug to try, I’m focused on figuring out what makes this disease tick. Once we know this, we can identify key vulnerabilities that might be used to attack this cancer.”

One frustrating challenge for rhabdomyosarcoma, especially the type known as fusion negative, is that the tumors all seem to be markedly different. Because researchers haven’t found a single genetic mutation that is present in all or most of the patients with this cancer, it had been difficult to develop a targeted treatment.

Looking beyond the code

Although fusion negative rhabdomyosarcoma tumors are genetically diverse, it turns out that they do share certain epigenetic modifications — changes that control gene expression without affecting the genetic code. Another research group found that in 90% of patients with fusion negative rhabdomyosarcoma, the tumor suppressor gene PTEN was turned off due to an epigenetic change. This means that the cellular machinery that typically protects cells from becoming cancerous is essentially turned off in these patients.

To learn more about this process, Hatley and his team developed a genetically engineered mouse that models fusion negative rhabdomyosarcoma. “When we turned off PTEN in the mouse models, tumors developed much faster and more of the mice developed the tumors,” he explained. “The resulting tumors were not only more aggressive, but also more closely resembled rhabdomyosarcoma tumors from patients, which validated our model.”

Studies in other cancers have shown that PTEN in the cell cytoplasm—the gooey substance that makes up the bulk of a cell—weakens a signaling pathway that normally helps regulate the cell cycle. However, when the researchers knocked out PTEN in the fusion negative rhabdomyosarcoma tumors, they were surprised that it didn’t seem to affect this pathway.

When the researchers took a closer look, they found that in rhabdomyosarcoma cells, PTEN was mostly in the cell nucleus instead of its usual spot in the cytoplasm. Additional experiments revealed that this nuclear PTEN was controlling expression of PAX7, a gene that plays a key role in determining whether a cell stays normal or turns cancerous.

“When we removed PAX7 in human rhabdomyosarcoma cells, the cells died,” said Hatley. “This showed that the PTEN–PAX7 relationship is required for maintaining these cancer cells.” Hatley and his team recently published these findings in Nature Communications.

This project was pretty risky, and the V Foundation was absolutely critical to getting it off the ground. The support allowed us to gather data that we were able to leverage to secure an R01 grant from the National Cancer Institute.Mark Hatley, M.D., Ph.D.

With this new funding, the researchers are now digging deeper into the PTEN–PAX7 pathway to find weaknesses that could be exploited with targeted therapies. They hope that their new insights can lead to therapies that give kids with rhabdomyosarcoma a fighting chance at a long and healthy life.