Vaccines are a game-changer in the fight against COVID-19. Could the same be true for cancer?

Leonid S. Metelitsa, M.D., Ph.D., of the Texas Children’s Hospital, believes a new vaccine may turn the tables on one of the most heartbreaking diagnoses a family can face: childhood neuroblastoma. If successful, the vaccine could even bring new treatment options for many other types of cancer.

Neuroblastoma usually strikes during early childhood and can be extremely aggressive. In about half of patients, the cancer has already spread and is hard to treat by the time it is detected. While there are success stories with current treatments, the cancer often comes back within a few months or years. 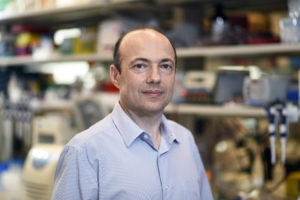 Metelitsa’s work is supported by a 2016 V Foundation Translational Grant funded by the Buster and Kristen Posey fund with recognition to Dick Vitale. The research concentrates on improving the options for children facing the most aggressive form of the cancer – and the most daunting odds.

“Despite a number of different treatment options including surgery, high-dose chemotherapy, bone marrow transplants and more, the outcome for the disease is still poor for many patients,” said Metelitsa. “Our vaccine targets a specific antigen that is associated with the aggressive features of the disease such as protecting tumor cells from death and resisting therapies.”

How does it work? The vaccine focuses on a common marker (or antigen) called Survivin, that exists not only in neuroblastoma, but in many other types of cancers. Metelitsa and his team use a weakened version of Salmonella bacteria to carry the vaccine. The vaccine then teaches the body’s immune cells to recognize the antigens and eliminate the tumor cells.

“People who get infected with Salmonella usually respond with a strong immune response,” said Metelitsa. “We discovered we could use this bacteria as a vehicle to deliver tumor-associated antigens found in neuroblastoma and produce an effective immune response.”

While Metelitsa and his team were confident they could use Salmonella to carry the vaccine, they needed additional funding to hone the vaccine’s ability to target the right antigen – and put it to the test. A V Foundation grant came just in time.

There can be a gap to find funding and go from something we know should work to then developing the supporting evidence to get it to a clinical trial. The V Foundation provided the funding to bridge that critical gap between basic science and clinical trials.LEONID METELITSA, M.D., PH.D.

The team is now in the beginning stages of a clinical trial (which has admittedly been slowed by the COVID-19 pandemic) to test the vaccine’s safety in adults with multiple myeloma, another cancer that features high levels of Survivin. By year’s end, they hope to have enough safety data to begin trials with children facing neuroblastoma.

Eventually, the team plans to explore whether the vaccine could offer a new treatment option for other tumors that contain Survivin, but for now, Metelitsa is focused on making neuroblastoma deaths a thing of the past.

The vaccine, however, would not replace existing treatments.

“We’ll get rid of the bulk of the disease through standard therapies, and once the patient finishes treatment and their immune system is restored, we would give the vaccine,” said Metelitsa. “By generating a protective immunity against the tumor, we hope it can lead to complete eradication of the tumor and long-term immunity.”

That means more kids growing up and living healthy lives and fewer parents losing their children to this deadly disease. Once again, research moves us closer to Victory Over Cancer®.