Susan Braun to retire from role in January 2021

The V Foundation for Cancer Research, a top-rated cancer research charity, welcomes Shane Jacobson as the new chief executive officer upon the retirement of Susan Braun in January 2021. Jacobson, currently president and CEO of the University of Vermont Foundation (UVM), brings with him two decades of record-breaking fundraising experience. Combining his passion for sports and eradicating cancer, this new role will allow Jacobson to build upon the V Foundation’s tremendous growth over the past decade.

“We are excited to welcome Shane to the V Foundation team,” said Evan Goldberg, Founder and Executive Vice President of Oracle NetSuite and Chair Elect of the V Foundation Board of Directors. “He is a proven leader with a stellar track record in philanthropy. Jim Valvano challenged us to defeat cancer, and the V Foundation has had 28 years of exceptional leadership on the path to fulfilling that goal. Shane has demonstrated a deep appreciation for this history and possesses the energy and enthusiasm to push us further towards victory over cancer. We all look forward to working with him in the new year.” 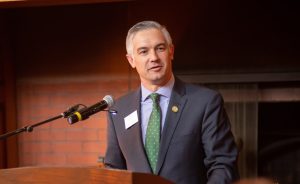 Jacobson received his bachelor’s and master’s degrees from Iowa State University, and he completed the Harvard University Management Development Program. At UVM, Jacobson led a team that set an all-time record in fundraising through a highly successful $581 million campaign. Included in this total is nearly $300 million in support of academic medicine and patient care, as well as $43 million for athletics. Jacobson and his team also secured substantial investments in research and scientific discovery by more than doubling the number of endowed faculty professorships and chairs, with more than 125 positions now at the University.  Throughout his career, Jacobson has served on numerous boards and committees, including the Association of Governing Boards’ Council of Presidents and AGB Foundations Advisory Council, the UVM President’s Commission on Inclusive Excellence and the Vermont Business Roundtable. He and his teams have received multiple CASE Circle of Excellence Gold and Silver Awards. Additionally, he has spent time on Capitol Hill engaging members of Congress to discuss the role of philanthropy in America.

Susan Braun has served as chief executive officer of the V Foundation since 2012.

As a passionate advocate for people with cancer, Braun has spent more than 25 years working towards finding ways to diminish suffering caused by cancer and other conditions, at the individual and global levels. While at the V Foundation, she has overseen the creation of essential programs such as the Stuart Scott Memorial Cancer Research Fund, the Robin Roberts Cancer Thrivership Fund and the Canine Oncology Research Consortium. Under her leadership, the V Foundation experienced a 107% growth in annual grant amounts awarded, accelerating the organization’s vision of defeating cancer. Among her appointments and responsibilities, Braun has served on boards and committees for several organizations, including: National Cancer Institute, American Society for Breast Disease, World Society of Breast Health, Duke ESAB, California Breast Cancer Research Program, AmeriCorps NCCC, National Dialogue on Cancer, Intercultural Cancer Council, ASCEND Foundation, Cancer Moonshot Initiative and Smith Center for Healing and the Arts.

“Susan’s remarkable leadership is only surpassed by the fact that she’s quite simply a phenomenal human being,” said Steve Bornstein, V Foundation Board chair.  “Not only has she made a tremendous impact of leading the V Foundation into an exciting new era of grant making, but she’s also laid a solid foundation for the future.”

Jacobson will head a talented V Foundation leadership team and staff, and he will collaborate with an exceptional Board of Directors and Scientific Advisory Committee. The Board is comprised of prominent business leaders, award-winning athletes and coaches, distinguished physicians and world-renowned entertainers. The V Foundation’s Scientific Advisory Committee is responsible for reviewing grant applications and recommending awards. It is comprised of some of the nation’s leading physicians and research scientists from prominent universities and cancer centers.

For more information about the V Foundation and its mission, please visit v.org.

About the V Foundation for Cancer Research
The V Foundation for Cancer Research was founded in 1993 by ESPN and the late Jim Valvano, legendary North Carolina State University basketball coach and ESPN commentator. The V Foundation has funded more than $250 million in game-changing cancer research grants nationwide through a competitive process strictly supervised by a world-class Scientific Advisory Committee. Because the V Foundation has an endowment to cover administrative expenses, 100% of direct donations is awarded to cancer research and programs.  The V team is committed to accelerating Victory Over Cancer®. To learn more, visit v.org.