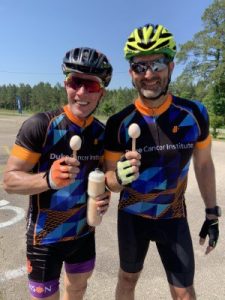 Cancer was not on this cycling enthusiast’s radar. Tom Vibert went to the doctor for a routine physical and mentioned a lump on his abdomen.  The CT scan showed a mass. Suddenly, at 49 years old, Tom was undergoing a partial colectomy and facing the reality of stage four metastatic colon cancer.

Tom’s only goal was to survive.  He wanted to be a part of the solution and strived to be the best patient he could. Undeniably, Tom was “ALL in.” Unfortunately, after two years of chemotherapy and radiation, the tumors shrank but always returned.  The cancer was growing into his celiac nerve, and Tom was in severe pain.  He could not eat; he could not ride; he could not function without pain medication. Tom had limited options.

The clinical trial was a game-changer. I felt like I was finally playing offense. It’s why I advocate for science.Tom Vibert

The Need for Advanced Screening

After genetic testing, Tom learned he carries the gene for Lynch Syndrome, an inherited condition that increases the risk of certain cancers.  He also tested positive for MSI-H, an instability in DNA sequencing.  The MSI-H marker qualified Tom for a new clinical trial using an immunotherapy drug primarily used to treat lung cancer and melanoma. Determined to beat cancer, Tom did not hesitate to start the trial.  The new drug ignited his immune system and saved his life. Thanks to Tom and other trial participants, the drug is now FDA approved to treat colon cancers with the MSI-H marker, saving even more lives. 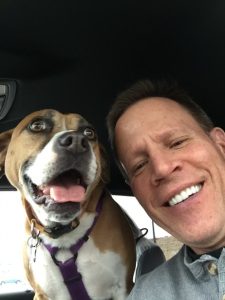 Today, Tom advocates for early screening for colon cancer and raises money for cancer research by riding in events such as the V Foundation’s Victory Ride to Cure Cancer. Ultimately, Tom remains a fierce competitor — he loves going on 100-mile bike rides and “getting in cancer’s face.”