Although great strides have been made in treating cancer, there are still some types of cancer that don’t respond well to treatment. When studying these hard-to-treat cancers, researchers tend to focus on a single mutated gene or one signaling pathway. However, tumors, especially those that affect children, can be more complex than this. 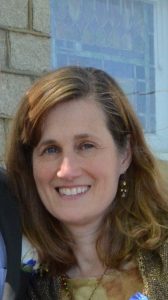 “We often think of the communication signals between cells and within cells as linear, and that’s how it is explained in in textbooks,” said Corinne Linardic, M.D., Ph.D., from the Duke University School of Medicine. “However, it doesn’t really work that way. There is a constant conversation taking place between different pathways in different cells. Because of this, we need to be very open-minded when studying cancer.”

With V Foundation funding, Linardic is working to tease apart some of cancer’s complexities by studying the interactions of two cancer-causing proteins involved in the childhood cancer rhabdomyosarcoma, the most common soft tissue sarcoma in children. A better understanding of the cellular “conversations” involved in this connective tissue cancer could lead to more effective treatment approaches.

“Rather than studying one aspect of a tumor or looking at a particular potential treatment, we are asking ourselves what this tumor can teach us,” said Linardic. “We’re approaching our work with the understanding that the medicines we need may not exist yet. In fact, it’s likely that each child’s tumor may eventually require a slightly different treatment approach.”

Listening in on cellular conversations

Linardic is studying the proteins produced by the RAS and YAP genes. Until recently it was thought that mutations in these proteins act independently in rhabdomyosarcoma. However, Linardic’s research team, especially the efforts of postdoctoral researcher Alex Kovach, Ph.D., found that in the embryonal type of rhabdomyosarcoma, called ERMS, there seem to be many points at which these proteins and their signals cross paths.

“With the V Foundation project, we wanted to elucidate YAP’s role in ERMS tumors with a RAS mutation,” said Linardic. “Because other human cancers also have RAS mutations and YAP upregulation, this work might reveal insights that are important for other cancers.”

After cultivating ERMS cancer cells with a RAS mutation, the researchers “eavesdropped” on the messages YAP proteins send within the cancer cells. They discovered that YAP helps relay a message from the cell’s outer membrane to suppress a protein in its interior. The content of the message? “Keep growing.” Rather than exiting the cell cycle as they normally would, cells receiving this message keep growing and multiplying—a hallmark of cancer.

Based on this finding, Linardic zeroed in on a drug that was recently identified to indirectly target this YAP signal. When the team tested it in ERMS mouse models, the drug slowed growth of the cancer cells.

As part of the project, the researchers also explored ERMS cancers that don’t have RAS mutations—or, for that matter, any other notable genetic mutations. To find out what makes these cells cancerous in the absence of mutations, the researchers looked to long strands of RNA that influence how genes are expressed, called long non-coding RNAs. This led them to a particular long non-coding RNA that appears to play an important role in turning off tumor suppressor genes in ERMS, which could explain how these tumors get started without particular DNA mutations.

The security of having a three-year grant allowed us to explore this RNA biology idea that sprang from our original hypothesis. We were really excited by what we found, and this has led our lab in a completely new direction.Dr. Corinne Linardic

The data and information gained with the V Foundation funding helped Linardic secure additional funding to study whether long non-coding RNAs might be tractable therapeutic targets in rhabdomyosarcoma.

“I hope that eventually we can begin to understand or categorize each child’s tumor to figure out the right combination of drugs for that tumor based on whether it has a mutation in protein-coding genes or non-protein coding genes,” said Linardic. Realizing that vision would help more families rest easier in the knowledge that their child is getting exactly the right treatment to give them the best possible chance to survive and thrive.