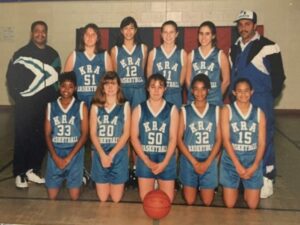 It all began on the softball fields and basketball courts in Virginia Beach, VA, where two young girls battled during league championships and bonded over a love of sports. Little did they know, 25 years later, the teammates would be reunited by their desire to reduce racial disparities and improve outcomes for people with cancer.

After high school, Donita Brady and Dwan Thomas, NCAA athletes in softball and basketball, respectively, went to different colleges, each pursuing a STEM career. Later, they would find themselves on the front lines of cancer: one as a scientist and professor, the other, a patient and advocate. 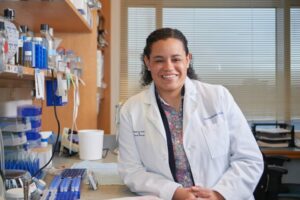 Donita Brady, Ph.D., played softball at Radford University before pursuing her doctorate and finding her passion working as a cancer biologist at the Perelman School of Medicine at the University of Pennsylvania. Today, funding from the V Foundation’s Stuart Scott Memorial Cancer Research Fund allows her to research new therapies desperately needed for pancreatic cancer, one of the most deadly and difficult-to-treat types of cancer.

As part of her future research, Donita will shift her focus to study genetic mutations and physiological differences common to Black patients that reduce the efficacy of certain chemotherapy drugs. To further improve outcomes, her colleagues at Abramson Cancer Center recently doubled the participation of minority patients in clinical trials from 12 to 24 percent. Donita knows her work may someday save lives. She is equally aware of just how important her role as a minority scientist is in eliminating health inequities. 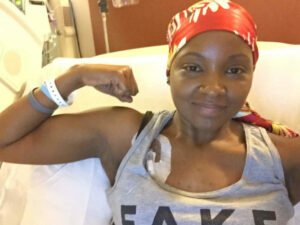 Sports and science came together in Dwan’s life, too. In college, Dwan played basketball at MIT and soon discovered her love for chemical engineering. Years later, she was getting ready to celebrate her 36th birthday when she noticed her breast felt more dense than usual. Dwan quickly dismissed it, deeming it a benign cyst. After all, she hadn’t even gone for her first mammogram, thinking she was way too young for cancer. But a biopsy revealed advanced stage 2 invasive HER2-negative breast cancer. Dwan pushed through treatment like a full-court press, and ultimately defeated cancer.

After her experience, Dwan urges her family and friends to be more diligent about their health. Like many in her family, Dwan’s father was leery of doctors and medicine, but because of her experience, he sought medical attention for a problem that led doctors to discover a cancerous tumor on his kidney. Thankfully, her father’s outcome is positive because of his early diagnosis.

Today, Dwan shares her story in various community initiatives and fundraisers, and advocates for research in cancer prevention. In addition, she volunteers at MD Anderson Cancer Center and is dedicated to helping the institution advance its mission to end cancer.

Dwan and Donita are keenly aware that representation of diverse groups matters in driving the research insights and innovations that are needed to overcome cancer disparities. Once again, they find themselves on the same team, this time, working to save lives in their communities.